Vietnam’s climate is characterized by high temperature and humidity and strong monsoon influence. Overall, the country can be divided into 3 separate regions: the North, the Central and the South. Northern Vietnam has 4 seasons: spring, summer, autumn, and winter. Meanwhile, the Central and the South have only 2 seasons: rainy and dry season. The following article will provide you with necessary information regarding Vietnam climate and weather.

What are Climate and Weather?

Weather is a collection of states of the atmosphere at a given time or period. This term often refers to the meteorological phenomena in short periods (day or hour).

Climate includes many factors such as temperature, humidity, precipitation, atmospheric pressure, phenomena that occur in the atmosphere and many other meteorological factors over a long period of time in a region.

Vietnam covers a total area of 331,210 km2. The length of the route (in bird eye’s view) from North to South is 1650 km. In a way, Vietnam’s shape is shaped like an S, running along the longitudes, stretching from the North to the South. Three regions have different geographical locations, results in different climate in each region.

There are about 100 rainy days per year in Vietnam, with the rainfall measuring between 1500-2000 mm with lots of sunny hours and the average temperature from 22-27 degrees Celsius.

Climate change from north to south

As you move more toward the South, the temperature is gradually getting higher. This is because the South is closer to the equator than in the North of Vietnam. In the North, from November to January of the next year, the weather changes to winter, the Northeast monsoon appears. As it blows towards the South, it gets blocked by the Bach Ma mountain and becomes weaker. The Southern region, therefore, sees less effect from the monsoon and has no winter but only rainy and dry seasons.

This phenomenon causes 3 different types of climates between regions as follows:

Monsoon and its effects on the climate of Vietnam

As monsoon is a direct influence on the formation of Vietnam’s climate, we need to first understand two concepts: monsoon and monsoon climate.

Monsoon is a seasonal reversing wind, which changes its direction following the change of season. In Vietnam, there are 2 types of monsoon: Southwest monsoon (hot, humid) and Northeast monsoon (cold, dry).

What is a tropical monsoon climate?

Tropical monsoon climate is a unique climate of the tropical zone, typically in South Asia and Southeast Asia. This type of climate has two outstanding features: the temperatures and the precipitation changing according to the season and erratic weather conditions.

The tropical monsoon climate has an average monthly temperature of over 18 degree celcius each month and has the typical wet and dry season with the average annual rainfall from 1,000 – 1,500 mm. The northern part of Central Vietnam and the southernmost part of Southern Vietnam are characterized this a monsoon climate.

Northern Vietnam: The climate and the best time to travel

As mentioned above, Northern Vietnam is influenced by the Northeast monsoon, blowing from Siberia. Winter monsoon lasts from November to April next year. From February to April, the North is marked with cold and wet winters.

Especially in the period of March to April, the humidity in the air is high, causing much discomfort for human. This condition is often refered as the floor “sweating”.

From May to August, the weather in the North turns to sunny and hot, where the highest temperature can be up to more than 40 degrees Celcius. In September – October, the temperature decreases and the weather is relatively cool.

The summer months from May to October are specified with high temperatures, high humidity and rainy days. In September, temperatures rise slowly, reaching their peak in June and July and; slowly decrease from September. The temperatures fluctuate around 35 degrees Celsius on average during the summer months. The summertime is also the rainy season in Northern Vietnam. Heavy rains in the Red River Delta area caused humid weather. The climate in the mountains area is similar to the northern lowlands, but the climate seems to be cooler in the higher regions.

The climate in Hanoi and Halong Bay

One of the most attractive destinations for domestic and foreign tourists to visit is the Capital Hanoi and Ha Long Bay (Quang Ninh) – home to one in the TOP 7 beautiful beaches in Vietnam.
The climate here is mostly hot, humid and rainy, lasting from May to October. Hanoi and Ha Long are also two of the tourist destinations that are less affected by storms. 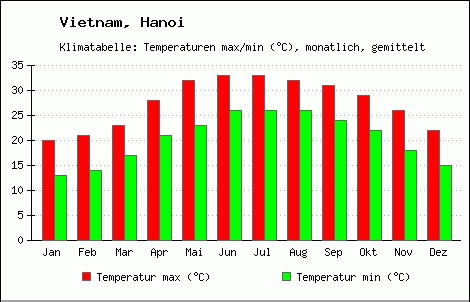 Climate chart: Number of sunny and rainy hours in Hanoi

The most suitable time to travel to Hanoi is from September to November. During this period, the weather in Hanoi in particular and the Northern provinces, in general, is quite cool and pleasant with the average temperature is from 27-31 degrees Celsius and the heat is not too intense.

If you visit Hanoi in the winter, you will get to experience the pleasant cool air. However, from November to January, Hanoi’s temperature drops very low, some places have a temperature drop below 8 degrees Celsius. That can really affect your health and outdoor activities.

The weather in Ha Long Bay is quite similar to that in Hanoi. If you want to get the most fulfilling experience when visiting the islands and caves here, you probably should not visit Ha Long in winter. The weather is cold and dry, sometimes even rainy and gloomy. This cloudy weather reduces visibility, making it impossible to see the beauty of this natural world wonder.

Instead, you should go to Ha Long Bay from May to September. At this time, besides visiting famous places, you can even swim in clear water or sunbathe on the fine white stretching sand beaches.

In the northern mountains area of Vietnam, such as in Sapa, temperatures can sometimes drop below freezing point. February and March are the coolest times with temperatures from 20 degrees Celcius to 23 degrees Celcius and almost no rainy days at all. However, the sunshine coming in these months is not intense, it only appears a little at noon and early afternoon. For most of the days, the sky is gray and cloudy.

Climate chart: Number of sunny and rainy hours in Sapa 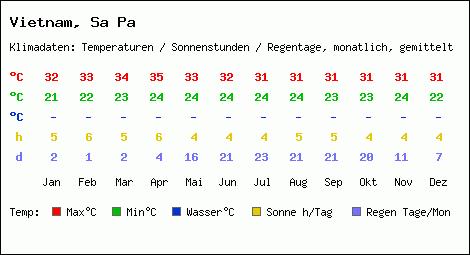 It is quite difficult to say when is the best time to visit Sapa. In the rainy season (around May to September), you will see the most beautiful scenery with the terraced rice fields changing color from silky green to yellow. In December and January, Sapa is very cold since it is a high mountainous area. Although the weather is much warmer in February and March, the stunning views of the rice fields still remain hidden in the fog. During all the months in Sapa, you should bring warm clothes as the temperature difference between day and night can be up to 20 degrees Celsius.

Best time to travel to Sapa

With cool air all year round, visitors can visit this place in all months of the year. In January and December in Sapa, the weather is quite cold and dry, sometimes with drizzly rain but does not affect your travel much.

From February to April, the weather has changed in a more positive way. It is no longer cold like the last months of the year and the air is still dry, really suitable for visitors to visit.

From May to September each year, Sapa begins to enter the rainy season. However, the rains are usually short, the sky is still clear with a little seasonal fog. If you come to Sapa this time, you will witness firsthand the beauty of the picturesque mist of the golden terraced fields, and immerse yourself in the delicate fragrance of new rice.

For domestic tourists, Sapa is a popular winter destination. Since there is no place in the country that has a cold temperature enough to form ice and snow like here. It is quite a fun and interesting experience.

Central Vietnam: The climate and the best time to travel

It can be said that the Central climate is an intersection and a combination of Northern and Southern climate. The north of the Central region is influenced by the humid tropical monsoon climate, while the south of the central region is somewhat tropical. Hai Van Pass becomes a natural boundary dividing the climates between the North and the South.

The climate in the north of Central Vietnam has significantly more rainy days than the south. The central coastal areas are frequently hit by storms, causing severe floods. Especially in September and November, you should not travel to these coastal areas.

The North and Central Coast has a dry season from March to August and a rainy season from September to February of the next year. The highest temperature is between June and August, in which some places even reach 40 degrees celcius and higher. From August to December, tropical storms occur in high frequency, causing floods in several coastal provinces. Some famous tourist destinations such as Hue and Hoi An are also deeply affected in December.

Climate chart: Number of sunny and rainy hours in Hue 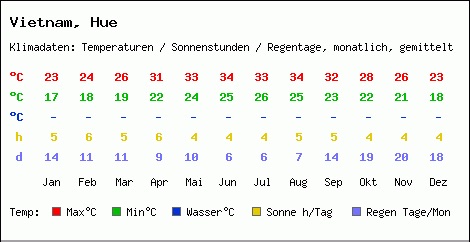 The South Central Coast region has a dry season starting from January and lasting until August, and the rainy season from September to December. Further to the south is the Da Lat plateau (Lam Dong), this area has a relatively cool temperature, ranging from 20 to 25 degrees Celsius during the day and dropping sharply at night. The South Central Coast is the region with the highest rainfall in the country and frequently suffers from natural disasters such as storms or floods.

Southern Vietnam: The climate and the best time to travel

Southern Vietnam has a tropical climate all year round. Only in the mountains can it be a little cooler. The separation between dry and rainy seasons in the South are more noticeable than in the North.

In this tropical South, there is a difference between warm and dry climate (November to April) and hot and humid climate (May to October). From May to October, the Southwest monsoon blows into our country and causes short and heavy rain. Humidity soars, usually over 90%. This simultaneously cause a rainy season from June to October, often leads to flooding, especially in the Mekong Delta.

Climate chart: Number of sunny and rainy hours in Saigon

If you are not afraid of hot weather, you will enjoy Ho Chi Minh City in the clear blue sky with less cloudy and bright sunlight and lots of sunny hours. It can be said that Saigon is a younger, more modern city than Hanoi. If you want to travel to a place with good service, you will definitely love Ho Chi Minh City. You can visit the South basically every time of the year.

There are all types of climates from the North to the South of Vietnam. If you want to see the snow then Sapa and the Northern Mountains region are not to be missed. As you move towards the South, the weather is getting hotter, the seasonal temperature difference is lower. This is the place with ideal beaches for you to hang out and enjoy the cool atmosphere there.

In general, Vietnam’s climate is quite suitable for you to travel year-round. However, visitors need to avoid overly hot weather or the rainy season as the weather can really affect your health and outdoor activities.